Home US News Violence Erupts in D.C. As Cops Direct Trump-Supporters into Gauntlet of Protesters 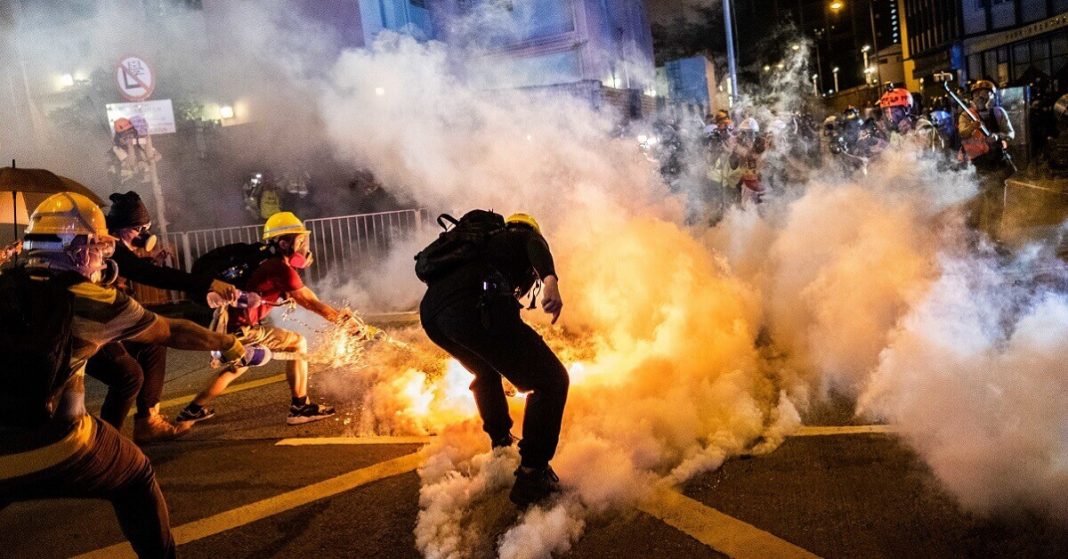 Thousands of Trump supporters flooded the streets to protest the results of the election in a march to the Supreme Court, called the Million MAGA March.

Street violence was incited between Trump supporters and counter-protesters, which resulted in 20 arrests as well as fistfights and a stabbing.

Protestors also gathered at many other cities across the country, even though there has been no substantial evidence to support Trump’s allegations of voter fraud.

In Washington, according to several social media videos, fights, projectiles, and clubs could be seen at the protests with the two opposing sides clashing. People were arrested on the charge of assault and weapons possession. Many firearms were confiscated by the police and two officers were also harmed.

To show his support for the march, Trump passed through the streets on his motorcade on his way to his golf club. Supporters gathered around to welcome him with chants of ‘four more years’ as well as placards that showed they were against the election results.

Protests have also been carried out in Florida, Michigan, and Arizona. A Georgia Republican also made an appearance to speak at the march in Washington. She is known previously for her racist views and her propagation of QAnon conspiracy theories.

The Proud Boys were also a part of the group of marchers, who are a neo-fascist group known for inciting street violence at political protests.

Conflict arose when Trump supporters tried to move to the area around the Black Lives Matter Plaza where anti-Trump protestors had assembled. As they entered, they were harassed and their MAGA hats and flags were seized and burned.

The ‘Million MAGA March’ was the talk of social media and was promoted all over before the march. Many people were worried about potential confrontations because, for weeks, anti-Trump demonstrators had been protesting at Black Lives Matter Plaza.

In light of the protests that have occurred over the summer, the director of Homeland Security and Emergency Management Agency announced that the police are well prepared to handle the protests that will likely entail after Election Day.

Analysts believe that Trump cannot be successful in staging a coup because Biden leads by huge margins in the swing states and a change of a few hundred votes could not change the results of the election. Moreover, the issues brought to light were also typical of the US election process, such as problems with signatures, a few ballots lost or miscast, etc.