Tonga volcano – The mid-ocean volcanic eruption has left the world in splitters. The massive undersea eruption close to the pacific island has started to showcase the aftermath of the volcanic eruption; the first death has been reported about 6000 miles away in Peru.

Australia and New Zealand have sent military aid and flights to the small island of Tonga in order to assess the impact of the humongous volcanic eruption.

The island of Tonga has been billowed by massive clouds of ash since the eruption that took place on Saturday. The shrouds of ash in the atmosphere have caused limitations in contacting the outside world as the only undersea cable connecting the island with the rest of the world has been massively severed as well.

New Zealand Prime Minister Jacinda Ardern stated that there are very few details at the moment regarding the Hunga Ha’apai volcano which triggered a tsunami warning which caused a “significant impact” on the capital of Tonga – Nuku’alofa.

No casualties have been reported on the island of Tonga yet but there have been two deaths reported in northern Peru in connection with the volcanic eruption.

According to the details, two women were swept and drowned by “unusually strong” waves on the beach of Chiclayo – Peruvian province which was triggered by the insane volcanic eruption.

Tsunami warnings were issued across the pacific region ranging from New Zealand all the way to Santa Cruz, California.

The New Zealand government is planning to send basic necessities supplies such as water, food, and other staple stuff through military transport aircraft in the upcoming days. According to the radio in New Zealand, the volcano eruption might become the largest eruption in the 21st century after monitoring its magnitude and intensity on the Volcanic Explosivity Index (VEI) scale. 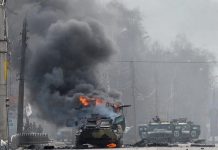