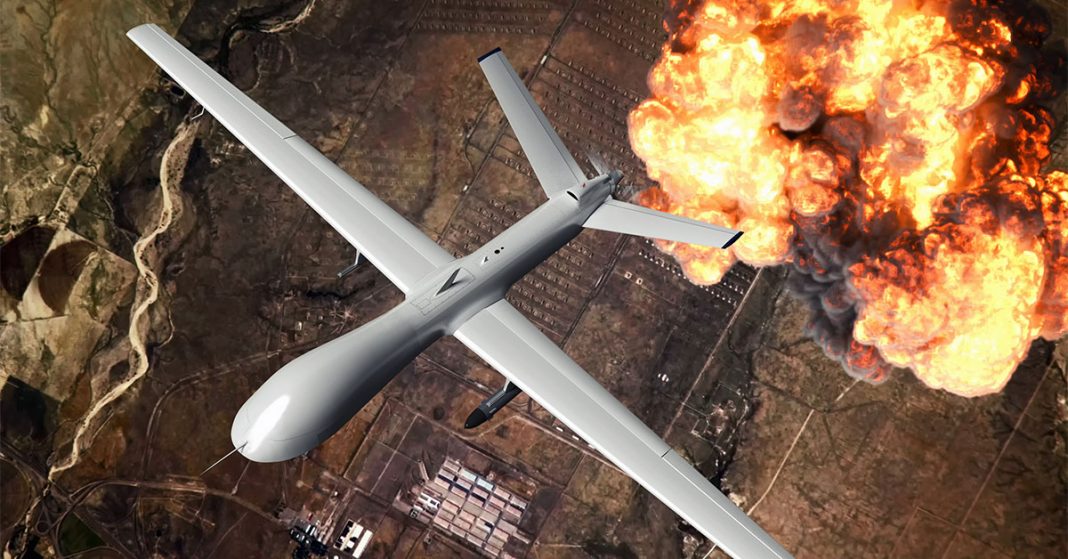 The Pentagon has carried out a drone strike in ISIS’ stronghold in eastern Afghanistan, assassinating a man suspected of planning the Kabul airport bomb on Thursday. The US drone had hit a member of ISIS-K in Nangarhar province, according to US Central Command.

A US source confirmed that President Joe Biden authorized the strike. The reaction came in less than 48 hours after the organization claimed responsibility for a deadly suicide bombing at Kabul’s airport, which killed up to 170 Afghans and 13 American military personnel.

The assault killed one individual and Navy Capt. William Urban, the strike’s spokesman, said there were no civilian casualties as a counterterrorism operation was conducted by the U.S military today against an ISIS-K attacker.

The unmanned aerial attack took place in Afghanistan’s Nangarhar Province. The spokesman said that they have killed the target, according to early indications and there have been no reports of civilian deaths.

He added that the terrorist was traveling in a car with an Islamic State member when a Reaper drone fired from the Middle East attacked him and both were killed.

A resident in Jalalabad, the capital of Nangarhar province in eastern Afghanistan, reported hearing several explosions about midnight on Friday. Sayed Ekram, the resident, said “we confirmed today and discovered that it was an airstrike that hit a civilian house”, adding that he didn’t know how many people were killed.

It was unclear if the explosions were caused by a US drone strike. Many ISIS-K members have been arrested in relation to the Kabul attack, according to a senior Taliban commander. ‘Our intelligence team is interrogating them,’ the commander added.

Earlier in the evening on Friday, the US warned its citizens to avoid the area surrounding Kabul airport.

‘American citizens who are presently at the North gate, East gate, Abbey gate, or New Ministry of Interior gate should immediately leave,’ the State Department warned. Another identical warning was sent Thursday morning, before to the suicide attack.

The explosion fulfilled a promise Biden made to the nation on Thursday when he said that the perpetrators of the assault would be unable to hide.

‘We will seek you and hold you responsible,’ he added.

Pentagon officials shared this Friday that they were ready for any retaliation attack authorized by the president. The U.S has its options there right now,’ Pentagon Joint Staff Maj. Gen. Hank Taylor said.

The explosion on Thursday came as no surprise to analysts who have repeatedly warned of the threat presented by ISIS-K.

In 2015, ISIS announced their expansion into the Khorasan region of modern-day Iran, Pakistan, Afghanistan, and Central Asia.

‘Every day we are on the ground, we are aware that ISIS-K is trying to attack the airport and murder both US and partner forces as well as innocent civilians,’ Biden said from the White House on Tuesday. ‘We are now on schedule to finish the project by August 31st. The sooner we finish this job, the better. Since each day of operations adds to the risks that our troops confront.’

Prior to the mid-afternoon explosion on Thursday, the American, Australian and British intelligence agencies all sent urgent warnings to their citizens to avoid the airport.

ISIS-K is not connected with the Taliban and, since it is not bound by Washington’s agreements, poses a new and severe threat. The organization was established in 2014 as a breakaway group from another terror organization, Tehrik-e Taliban Pakistan (TTP), also known as the Pakistani Taliban.

ISIS’s leadership in Syria and Iraq officially announced the formation of ISIS-K in 2015, and the headquarter of the terror network has poured money into its Afghan offshoot.

Khan was killed by a US attack in 2016, and his three successors died in the same way. Shahab al-Muhajir, commonly known as Sanaullah, is believed to be the current leader of ISIS.

ISIS’s grip on northern Afghanistan deteriorated in 2018, and its control was put to the test in 2019. Following offensives by the Taliban, the US, and Afghan forces, the organization lost control of the bulk of eastern Afghanistan.

General Frank McKenzie, the commander of the United States Central Command, testified before Congress in March 2020 that the US worked with the Taliban to combat ISIS-K.

According to McKenzia, Taliban has successfully compressed and eliminated ISIS’s over the past months in eastern Afghanistan.

‘It was a massacre, but they succeeded.’ Indeed, ISIS has lost ground in Nangarhar province.’

When questioned specifically whether the Taliban had any assistance from the US, he replied, ‘There was very little support from America– and I would characterise it as very limited support.’

According to a December 2020 Department of Defense report, ‘ISIS-K sustained losses in 2019 as a combination of ANDSF operations, Resolute Support, and Taliban culminated in the collapse of the group’s last strongholds in Nangarhar and Kunar provinces.’

The authors warned that despite its “severely diminished operational capabilities,” ISIS-K was capable of carrying out devastating attacks in Kabul.According to the research, operations in 2019 against ISIS-K weakened the group’s hold on the region.

According to the research, ever since mid-2019, after the creation of ISIS-K branches in Pakistan and India, ISIS-K has played a less active role in administering regional ISIS networks.

‘It has a limited ability to organize or inspire foreign attacks outside of Pakistan and Afghanistan.’

‘While ISIS continues to develop connections outside of Afghanistan with other networks, it remains operationally isolated in South and Central Asia.

‘There is no evidence that a substantial number of Taliban have absconded ISIS-K as a consequence of the US-Taliban Agreement.’

This month, the Taliban is reported to have executed an ISIS-K leader.

‘ISKP caters to the most radical jihadist elements, and its proclivity for extreme violence without any concern for civilian fatalities attracts a significant following.’

And, he told the Voice of America, if the Taliban’s reign disappoints hardliners, their numbers may become bigger.

‘They may replenish some of their casualties via dissatisfied Pakistani and Afghan Taliban members, as well as the pool of extremists in Afghanistan and Pakistan,’ he added.