Home Entertainment Met Gala 2021: From the most outrageous to the most gorgeous –... 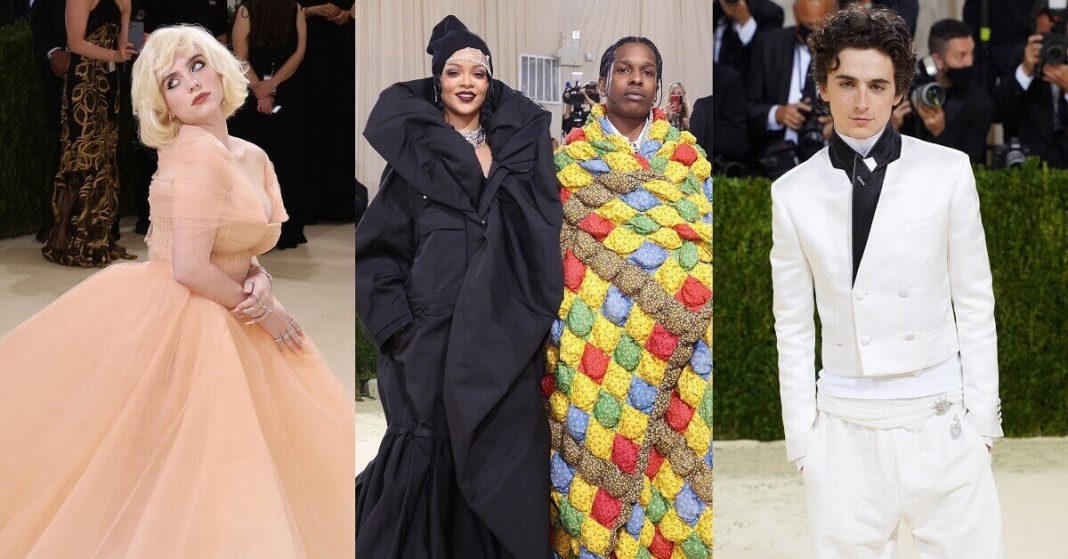 The party of the year – Met Gala returned with full might in the dark and dainty night of New York City on September 13 after a hiatus of a year because of the coronavirus pandemic.

The evening was crafted by Anna Wintour of Vogue and started with its regular glitz and glamour with guests arriving in their embellished gowns and costumes and dumbfounding appearances.

The Metropolitan Museum of Art’s Costume Institute steps and the building was taken over by the storm of celebs for a one-night rendezvous.

The event started with a disclaimer stating “all attendees required to present proof of full vaccination and negative rapid PCR test.”

Did someone invite dementors from the Prison of Azkaban? Well Kim Kardashian looked like coming straight from there, as she showed up wearing a Balenciaga overall which covered her completely in black from head to toe.

Democratic Rep. Alexandria Ocasio-Cortez showed up at the gala wearing a white embellished gown which had “tax the rich” written on the back stating that the tickets for the Met gala were $35,000 per person.

Rihanna lived up to the expectations! Though she was one of the last guests to arrive at the Met Gala, still her black attire stole the show. She wore a dramatic black gown by Balenciaga which endorsed more than 270 carats worth Bulgari diamonds.

The sultry cowgirl looks of Jennifer Lopez renegaded what the Met Gala has been proud of over the years.

One of the shocker but the most gorgeous was Billie Eilish who chose to wear a diaphanous gown by Fernando Garcia and Laura Kim, reminiscing the Marilyn Monroe look.

Most of the celebrities chose to wear Michael Kors believing it to be a safe option.

One of the most amazing gowns was Debbie Harry which was designed by Zac Posen. It was a ball gown skirt that was deconstructed in such a manner that it looked like a striped American flag. She paired it with a denim jacket.

The winners were the designers who had been waiting impatiently for the harrowing shadows of coronavirus to subside so that normalcy can prevail and they can showcase their collections. The event was successful as the celebs chose to represent the iconic and tasteful American fashion through their costumes and gowns.