Home US News What’s the deal with Barron Trump? Is he the new Trump tower? 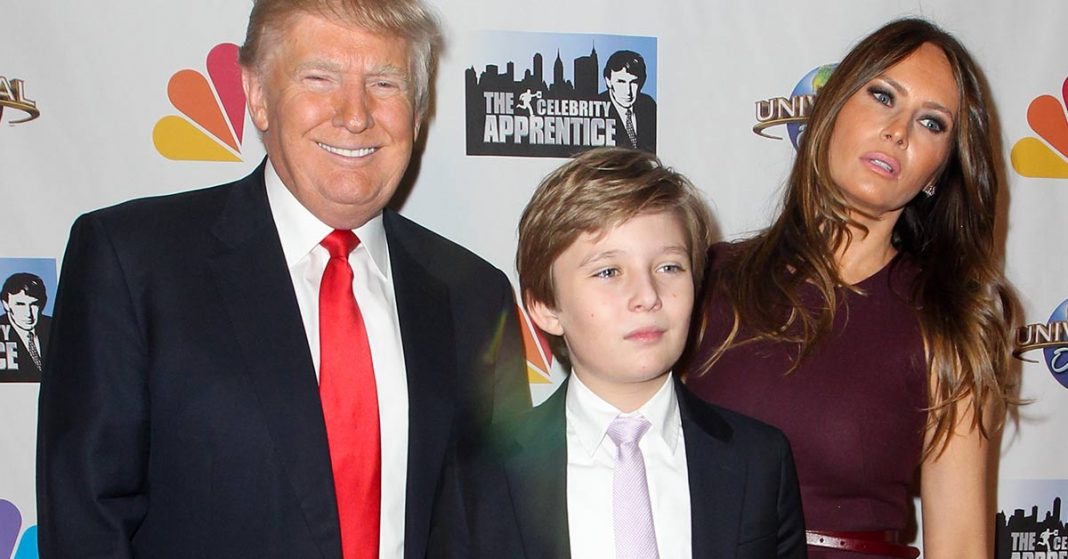 Barron Trump is the son of former President Donald Trump, a failed president and former First Lady Melania Trump was recently papped with his mother in New York City and the dashing kid has been all over the news since. Here is everything you need to know about Barron Trump,  the youngest child of America’s former President, Donald. J Trump.

Unlike other family members of the Trump family, this youngest member was always out of the spotlight. However, a recent click of him being with his mother, Melania Trump has caused a storm on the internet.

The main reason for him going viral is his height. Who can expect a 15-year-old to be taller than his mother? Well, this is exactly why Barron Trump has become the talk of the town. As this young kid has taken all the spotlight on him, there are many questions from the fans about him and his personal life, which we will answer here. Moreover, we will share some interesting facts about him as well. So stay with us and keep reading.

How Tall is Barron Trump?

Isn’t it shocking,  a tenth grader being this tall?  Well, according to Melania Trump, when she gave birth to her youngest son in 2006, even then he was a big baby with 3.85kg (8.5lbs) weight. It seems it’s in the genes.

How old is Barron Trump?

Making rounds on the internet, former First Son, Barron Trump, who has already shocked everyone with his height, turned 15 on March 26, 2021.

Where does Barron Trump go to school?

While the young Trump was in New York with his parents, he went to a private school, Columbia Grammar & Preparatory School in Manhattan. However, when Trump was elected in 2016, he had to leave that school and get admission at St. Andrew’s Episcopal School in Potomac, Maryland. Now Young Barron is currently studying at Oxford Academy in Florida as a member of the Class of 2024 and he is in 10th grade.

What is Barron trump net worth

Currently, Barron Trump is just a child, but as per the Celebrity Net Worth reports, currently Barron Trump estimates $3500 million. The number includes his father’s assets as well, which he may inherit in the future. Moreover, most of his income is through Donald Trump’s real estate and royalties. As he is just a student, currently estimating his exact net worth is not possible.

As Barron Trump was less seen publicly and has made very few appearances, there was speculation if the then-elected President’s son is autistic. A few videos on Youtube went viral to which Barron’s mother Melania Trump threatened to sue the posters of the video.

In the videos that claim Barron could be autistic, some of the videos were included where Barron is caught clapping without touching his hands.

However, Barron is not autistic, but a little awkward in big gatherings and also gets fidgety often in public. Moreover, there is no proof that Barron is autistic and the Trump attorney also claimed in his statement that he is not autistic.

Charles Harder’s statement when Melania sued the video posters: “This law firm represents First Lady-elect Melania Trump and her 10-year-old son, Barron Trump.  A video was posted at YouTube recently speculating that Barron might be autistic.  He is not.  The video includes the hashtag “StopTheBullying” but yet the video itself is bullying by making false statements and speculation about a 10-year old boy for the purpose of harassing him and his parents.  The online bullying of children, including Barron Trump, should end now.”

Barron Trump is not on social media, but he made his Twitter account in August 2012 with a username, @BARRONTRUMP. He is following only 1 person, while he has a following of 13K. Moreover, he hasn’t posted anything yet, which shows how inactive he is and his liking for social media altogether.

These were a few frequently asked questions about Trump’s youngest child Barron. There are so many interesting facts that you would love to know about this young man.

Barron Trump is a sneakerhead

For the past 35 years, all the children of the previous presidents of America have attended Sidwell Friends School, but Barron Trump was the first child in three and a half-decade to attend St. Andrew’s Episcopal School in Potomac, Maryland as was confirmed by the White House. On one of the occasions, Melania Trump has praised the school in a statement saying she chose this school for her son because of, “its diverse community and commitment to academic excellence.”

Barron Trump is the first, First Son who lived in the White House after John Fitzgerald Kennedy

From Bill Clinton to Barack Obama, both the Presidents who had lived on 1600 Pennsylvania Avenue, with their children, were fathers of daughters. And all the other presidents before them had grown-ups, who lived outside of the White House. This is why, Barron Trump is the first son to be living at this illustrious address with his parents after John Fitzgerald Kennedy, popularly known as JFK Jr., who lived for just three years from 1961 to 1963 until the sudden death of his father, one of America’s most popular and iconic Presidents, John. F. Kennedy.

Barron has a full floor to himself

Until Donald J Trump was elected as the President of the United States of America in 2016, Young Barron lived with his parents at their New York, Trump’s Tower Penthouse. There he had a whole floor to himself, which his mother referred to as Barron’s living room.

The family lived there even after Trump was elected President in 2016 so that young Brandon could complete his school year. As per the CNN Money report, each day’s expenditure for Trump’s family security was around $1 million.

Barron and his mother moved to the White House in June and Melania also shared a post on her Twitter, which said, “Looking forward to the memories we’ll make in our new home! #Movingday,” marking her first day at the official residence of the Presidents of the United States.

Barron has remained off the spotlight until now

Barron has made a few TV appearances including on The Oprah Winfrey show when he was very young. He was also seen during some of the events for Trump’s presidential campaign as well.

Since his time as the First Son, Barron has remained off the spotlight. He was first spotted with his parents when the family was boarding for Thanksgiving in Mar-a-Lago. And then when the family returned from Florida after spending the Thanksgiving holidays. This was the first time, where Barron was seen matching his father’s height. Another time he was snapped was when he made a rare public appearance at the annual White House egg roll in 2018, where he was pictured along with his parents while watching his young nieces and nephews hunting for eggs. Apart from this, there are not many of his public appearances.

This is one of the lesser-known facts about young Barron. He can speak English and Slovene. While English is his father’s National language, Slovene is his mother’s and the kid knows both. According to the reports Barron Trump was very young when he learned Slovene. Moreover, in a 2009 interview with People, Melania Trump also bragged about how her youngest son knows Slovene at the age of just three years old. She also revealed that he also speaks French.

Barron is fond of sports

In 2018, then American First Lady, Melania Trump said that her son loves sports during her speech. When Melania Trump was invited by Liberty University, in Lynchburg, founded by Jerry Falwell to talk about and raise awareness regarding the opioid epidemic, which was a part of her “Be Best” initiative, she shared about her family as well. It was then when she said Barron doesn’t use social media, instead he is “all into sports.”

Moreover, President Trump also said that he had  “a hard time” because his son was also playing football during the Super Bowl Sunday statement. He further added, “I just don’t like the reports that I see coming out having to do with football. I thought the equipment would get better, and it has. The helmets have gotten far better but it hasn’t solved the problem.”

Moreover, as the media like to call, “Little Donald” also loves to join his dad and siblings on the golf course.

All of these tiny bits of information here and there, tell us very much about Barron’s love for sports. And now when he is going viral for his height, many on the Twitterverse have commented about the former First Son’s NBA potential.

Barron is also a Covid-19 survivor

During the Pandemic, The White House website shared an essay in which the former First Lady had written about her battle with the fast-spreading Coronavirus. In that essay she also wrote about Barron testing positive for the virus, however, he was an asymptomatic victim.

“It was two weeks ago when I received the diagnosis that so many Americans across our country and the world had already received—I tested positive for COVID-19. To make matters worse, my husband, and our nation’s Commander-in-Chief, received the same news.

Naturally, my mind went immediately to our son. To our great relief, he tested negative, but again, as so many parents have thought over the past several months, I couldn’t help but think “what about tomorrow or the next day?”. My fear came true when he was tested again and it came up positive. Luckily he is a strong teenager and exhibited no symptoms. In one way I was glad the three of us went through this at the same time so we could take care of one another and spend time together. He has since tested negative.”

This is all we know about the youngest member of the Trump family and former First Son of America, Barron Trump. As it’s already a given fact that Barron is not a fan of media attention and keeps his life private, there are many aspects of his life that are a big secret.

For now, let’s just wish the young boy the best of luck in his future endeavors.