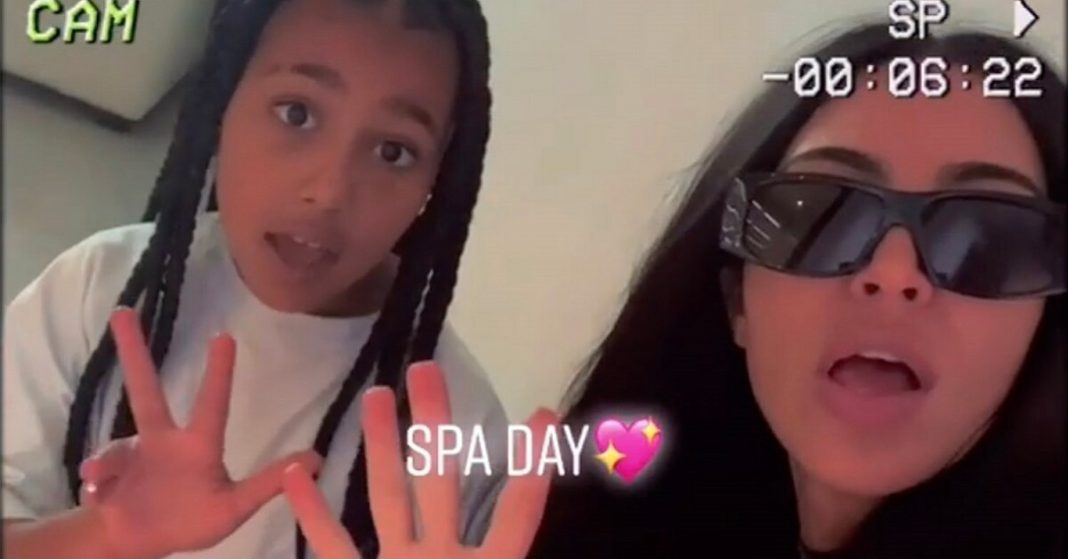 Certainly! Kardashian’s know how to cheer up their fans!

On the celebratory occasion of Thanksgiving, Kim Kardashian reveals about her new TikTok account that she has made with her daughter North, “KimAndNorth”.

The KKW beauty founder, 41, has recently created a TikTok account with her eldest daughter, North, 8, making their debut together on TikTok.

The American model and businesswoman not just revealed her new TikTok account but also shared her first-ever TikTok with her massive fan following.

The mother-daughter duo created their first video on Thursday that showed them spending quality time with each other while playing around with Kylie’s skincare products.

The text on the video reads “Spa day” alongside an adorable pink heart emoji. The video comprises several shots with Kylie’s skincare products, including a face mask, lip gloss, and serum set to Doja Cat’s famous song “Need to Know”.

The duo concluded their video by lip-syncing the lyrics “ten out of ten” and flashing up five fingers twice.

As for now, the account does not show any bio. However, the Keeping Up With the Kardashian’s star decides to use an adorable picture of her with daughter North for the profile photo.

The TikTok account currently has a few thousand followers however, the number is likely to grow as mommy Kim who shares three kids – Psalm 2, Saint 5, and Chicago 3 with former husband Kanye West use her Instagram account to share the word with her 265 Million Instagram family.

The TikTok video that she made with her daughter was shortly uploaded on Instagram to let the fans know that it’s her legitimate account.

Previously, Kanye West, who is now living separately, shared his desire to get back with Kim as he confessed on Skid Row that how much he wants to be back with her again. While sharing his personal life, Kanye also said that he is ashamed of doing inappropriate stuff publicly as a husband.

“The narrative that God wants is for you to see that everything can be redeemed,” said the guilty husband.

Of course, Kim and North are not the only mother-daughter duo in the family who have a joint TikTok account. Kourtney Kardashian also shares a TikTok account with her 9-year-old Penelope Disick named @pandkourt, who she shares with Scott Disick.

Their TikTok channel is flooded with lavish videos, flaunting the 9-year-old’s elite lifestyle. Some videos show her going on a vacation in a private jet, doing skincare, while others show her doing regular 9-year-old activities, such as going to stores or making hot chocolate.

The account bio reads, “Account managed by an adult. Can we get to 61k, please? Thank you guys so so, mic (sic).”

Khloe Kardashian woos the internet with her fierce blonde curls!