Home Sports Jake Paul laid out terms of a rematch for Tyron Woodley after... 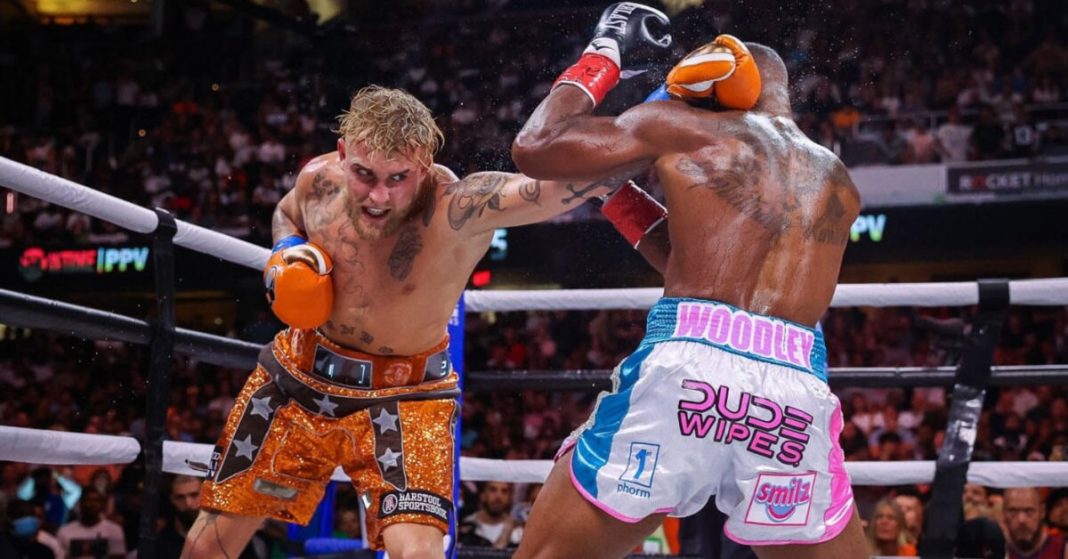 Jake Paul called out UFC champion Tyron Woodley for a rematch in front of 16000 fans at the rocket mortgage fieldhouse, Cleveland.  Paul outwitted Woodley in the eighth-round match by grasping on to a split decision victory but Woodley was quick enough to ask for a rematch.

It was Paul’s inhibition to go for a rematch but with his conditions. Paul demanded Woodley to place a tattoo and showcase it on his Instagram to have a rematch.

Jake Paul stated in a press conference that “I told him if he wants to get the tattoo, put it on his Instagram. Permanent tattoo. Then maybe we’ll talk about it. But to be honest, I won convincingly. We’re gonna go back to the drawing board, but I think I proved a lot tonight.”

Social media outlets witnessed intense moments between the two players and their respective camps throughout the build-up of the much-anticipated fight.  In an after-fight press conference, Paul stated that “he has no ill-will towards Woodley.”

“At the end of the day, it’s two men going in there risking their lives. So, after all the sh*t talk is done, I’m cool with showing respect. This is a crazy business, like I said, we’re risking our lives in there and he earned my respect.”

Tyron Woodley called out for a rematch immediately after losing to Paul. Losing a championship in front of a sold-crowd strictly batters the self-esteem of a player and his decision for a rematch was both for his inner satisfaction and to gain business-wise.

Woodley was anticipating a big fight that would last more than 2 rounds but this doesn’t seem to happen in Cleveland.

Paul admitted that he felt Woodley’s power across the whole fight and surprisingly he enjoyed his powerful stances towards him to defeat him.

Paul exclaimed “this was the first time I took a real shot with 10 oz. gloves. Okay, you got that round with that shot. No problem. I learned from it, made adjustments… I love that I got hit. I licked my gloves after that sh*t. let’s go!”

Paul who is commonly known as Jake Paul is a very famous social media personality while being a professional boxer.

His claim to fame was playing the role of Dirk Mann on Bizaardvark – a Disney channel series.

Challenging other boxers and stunt artists to claim fame is not new for Paul as this is how he tasted fame in the first place.

Jake Paul is known to be a subject of countless controversies since the initial stages of his career. He has also been spotted on his YouTube videos, engaging in very risky acts and stunts as well as featuring inappropriate material.

Paul has always been surrounded by controversies so this one is not new to him. Whether there will be a rematch between Paul and Woodley or not, only time will tell but Paul did instigate Woodley regarding the tattoo stating that if Woodley wants a rematch, the ink from his permanent tattoo must be dried up on his skin!