Collin Morikawa was lagging behind the expert pro-golfers but came back from behind on the final day of the British Open. He ran three straight birdies over the backline which massively helped him cross the South African and atop the leaderboard which had been hovering between the leads for the past three days.

This was Morikawa’s first appearance in the British Open; making him the first man ever to win both British Open and the PGA Championship on his debut.

Collin Morikawa exclaimed that he is not done winning the major tournaments and the best is yet to come.

He stated to the media after winning the British Open, “At 24 years old, it’s so hard to look back at the two-shot years that I have been a pro and see what I’ve done because I want more. I enjoy these moments and I love it, and I want to teach myself to embrace it a little more, maybe spend a few extra days and sit back and drink out of this.”

Morikawa sat on 1,039th position just two years ago while finishing at 14th place at the RBC Canadian Open in June of 2019. He has come a long way and in just 2 years he won two major tournaments.

Collin Morikawa became the first American to win the British Open since Ben Curtis in 2003.  The inexperienced American faced a lot of rivalry from the pro golfers but he managed to keep his cool under the scorching sun of Kent as the UK is experiencing a mini-heatwave these days. He dealt with all the challenges smoothly and put the historic putt into the 18th pole to clinch the 149th British Open championship. Thanks to the back-to-back championship win, Morikawa reached no.1 in FedEx cup ranking and comfortably sat on the position of no.3 in the world rankings. Collin Morikawa was also awarded the champion golfer of the year award this year. 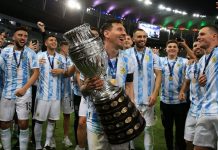