Home US News Twitterati Troll Mayor Blasio on His Warm Weather Tweet amid the Rising... 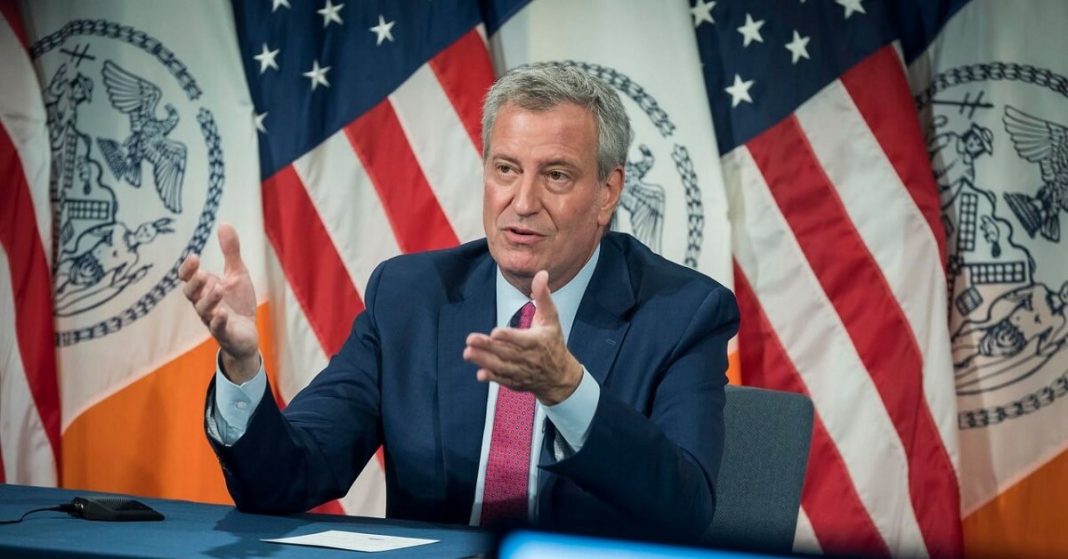 Mayor Bill de Blasio of New York City is being chastised on Twitter for boasting about loving the town’s warm weather at a time when a crime is now on the rise and people are fleeing in droves.

“The future of New York City is so bright that I’m forced to wear sunglasses!” the leftist politician tweeted, only days after city voters seemed to reject his legacy by electing a conventional ex-NYPD captain as the next probable mayor. (The primary election results are not yet complete, since the city’s new ranked-choice ballots have not been tallied.)

It was de Blasio’s second try at the topic, after his deletion of a similar tweet and ridicule over what seemed to be a woman’s T-shirted breast reflected in his mirrored spectacles.

“The future isn’t looking so good for these children,” one Twitter user said, referring to a news article about a terrible daylight shooting in which a masked shooter killed a father inches from two frightened children. “However, for a pretentious buffoon like you, I’m sure it’s fantastic.”

Four people are being wanted in Brooklyn on suspicion of vandalizing a George Floyd monument with White nationalist graffiti. This year, the city’s renowned Pride celebration prohibited homosexual policemen from participating. And on Tuesday, a city gang leader sought for murder since March reportedly murdered another guy.

The only thing that seems to be brilliant is perhaps the broad daylight in which many of these atrocities occurred.

As per the New York Post, a Jeep drove into a Bronx sidewalk last week, shooting down a family of six. That same day, a brawl in Manhattan left a guy with a stab wound to the stomach well before the suspect jumped into a vehicle and wrecked it four blocks away.

Not to mention a weekend stabbing in the Bronx of a campaign worker for Eric Adams, the ex-cop and top Democratic mayoral primary contender.

And police report that violence and disorder are widespread in the historic Greenwich Village area, where an average house costs $1.3 million. A bike-riding bandit is accused of breaking into an apartment via the window of a 10-year-old girl and rubbing his penis on her foot.

Even the area around Central Park is not secure. Just a few weeks ago, surveillance footage captured the midday killing of a 20-year-old man in a vehicle between Lexington and Park Avenues.

However, de Blasio did not seem to be thinking about any of that when he was caught wearing a peach-colored Hawaiian shirt and Bermuda shorts in a series of photographs commemorating the city’s public pool reopening.