WASHINGTON, D.C. — President Joe Biden presented ex-Army Officer Ralph Puckett the Medal of Honor, the country’s top military honor, for actions of gallantry and valor beyond and above the call of duty in the Korean war.

The distinction was bestowed on Puckett, 94, 70 years after he risked his life twice to defend his men and beat the enemy while battling what is now called North Korea.

Moon Jae-in, the President of South Korea, also attended the recognition ceremony. He met the US President at the White House on Friday and described Puckett as a Korean War’s Real Hero. This is the first time an international head of state has attended an event of Medal of Honor. 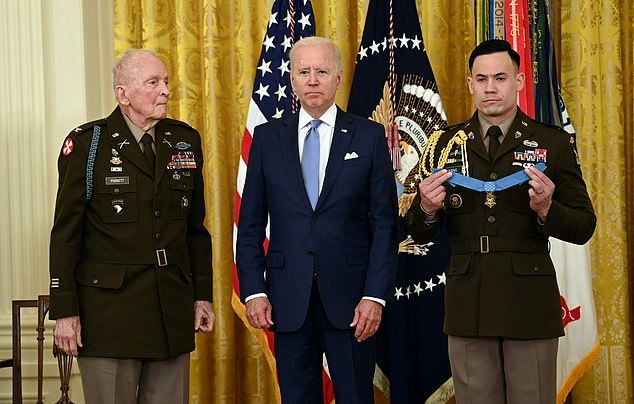 Ralph Puckett’s unit launched a daytime raid to capture Hill 205 whilst he was an Army Ranger. However, his 60 men came under heavy fire from hundreds of Chinese troops.

The White House released a statement saying that Puckett subjected himself to the fire of the enemy at one stage by mounting the nearest tank to provide support fire for his troops and shouted encouraging words to motivate his men and started leading the Rangers in the battle.

Ralph Puckett risked his life once more by running through an open field three times to attract enemy fire and aid US troops in locating enemy positions, which eventually resulted in the Rangers seizing Hill 205.

However, the enemy mounted a counterattack overnight, wounding Puckett with a grenade. However, he denied evacuation and continued to coordinate artillery support, moving through foxholes to monitor his company’s perimeter and supply ammo.

Puckett, mortally wounded by mortar fire and grenade, forced his troop to withdraw and abandon him in the combat zone to save themselves. His men dragged him to safety after they refused.

The Medal of Honor is presented to veterans of the military forces who have shown extraordinary personal courage or self-sacrifice that specifically distinguishes the soldier beyond his or her subordinates and may have required a risk of death. However, it is exceedingly unlikely for another nation’s chief to attend.

Puckett retired honorably in 1971 from the US army. In 1992, his name was added to the US Army Ranger Hall of Fame.