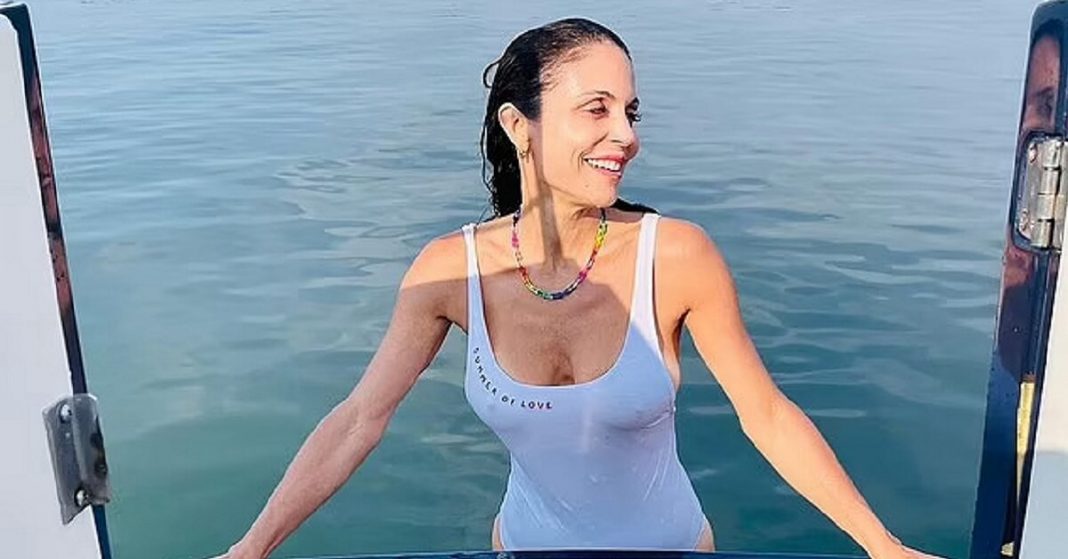 The 50 years old reality TV star looked like a beautiful swan in a white-clad onesie, wading through the waters as she enjoys leisure time.

Frankel’s swimsuit was very enticing, showing off her bosom and her perfectly toned arms with “summer of love” written on the right side of her swimwear.

Bethenny Frankel had shared a collage-style video on her Instagram account last week, with tidbits and snippets of her private moments and pictures, with Stevie Wonders’s voice in the backdrop; with fiancé, Paul Bernon while wishing him 44th birthday.

The former real housewives of New York star have always been open about her relationships in the past as well.  Frankel and Paul Bernon were first linked back in 2018 when they stated that their stats matched on a dating app. The reality star was previously married twice to two other people and has a daughter as well.

Bethenny Frankel first married Peter Sussman, an entertainment executive but divorced him back in 1997. Later, she had on and off relationships with Jason Colodne, and Jason hoppy.

She tied the knot second time with Jason Hoppy in March 2019; who is a pharmacist by profession. The couple welcomed a daughter, Bryn, just after making their relationship public. However, the couple separated their ways in 2012 and cited for divorce due to irreversible differences which were finalized in January 2021 due to many legalities and other drawn-out reasons.

The reality star began her relationship with her current fiancé, just months after her second marriage was officially dissolved. The couple announced their engagement in March 2021 as Frankel took to Instagram to post pictures and details regarding how Bernon proposed to her.

She described him as a wonderful human being and stated that he proposed to her on an island near Florida. They were vacationing and were very basic and simple. The whole proposal incident was sudden and there were no ring photos or makeup. Something very private yet memorable. Bethenny Frankel is 50 years old while her current fiancé just celebrated his 44th birthday last week.