Home Entertainment Ben Affleck and Jennifer Lopez: The Reunited Pair is in Love? 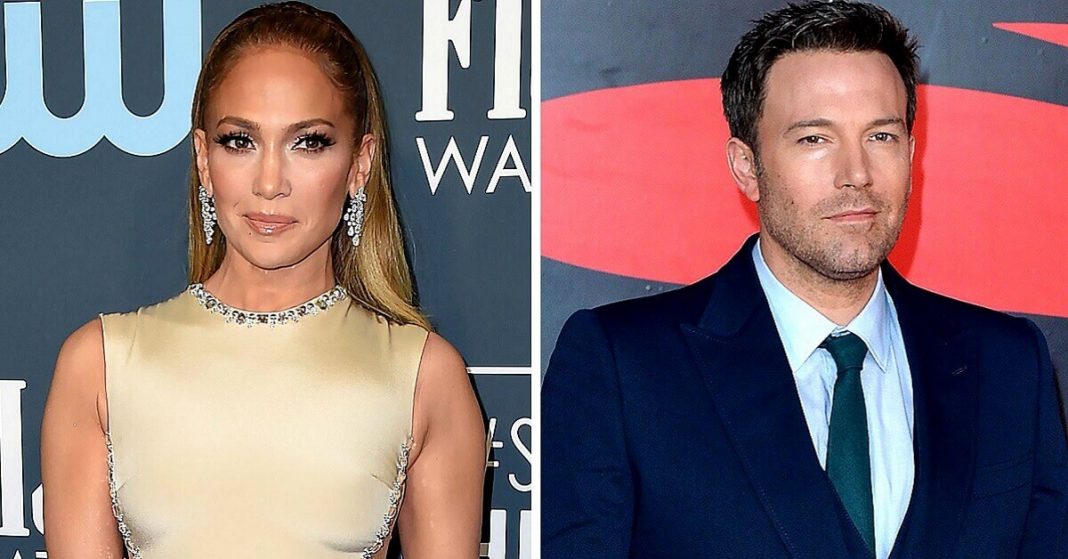 The reunited pair seemed to be completely in love as they conversed outside Ben’s enormous Pacific Palisades mansion after spending a complete day with Ben Affleck making a cheeky reach at his girlfriend’s renowned derrière.

Jennifer Lopez and Ben also had a very passionate kiss before saying goodbye to one another. Affleck tenderly grasped her hand and smiled in her way in one last effort to show love to his ex-fiancée.

She finally broke free of his hold on her and proceeded towards a neighboring car, accompanied by her helper while the “On The Floor” singer wore a skintight black turtleneck top with high-waisted beige pants.

Her golden locks were slicked back and perfectly fashioned into a ponytail, revealing her big gold earrings. Jennifer used a black Birkin bag that had gold hardware to carry her things. Additionally, the extremely sought-after purse matched Lopez’s stiletto shoes flawlessly.

Meanwhile, Ben wore dark wash denim narrow pants and a charcoal grey shirt for a more relaxed look. The Academy Award winner removed his shoes and replaced them with a pair of sneakers of grey and black color.

Jennifer and her assistant walked beside one another till they came to a black SUV in the distance. The Selena actress went up to the passenger’s side door, leaving the driving to her helper.

Jennifer and Ben’s renewed relationship has only intensified since they were first seen together in April.

The couple met seventeen years ago on the production of their 2002 box office smash Gigli, which resulted in their engagement in the year’s December. They were scheduled to marry in September 2003, but the ceremony was suddenly postponed owing to ‘excessive media attention.’

Regrettably, the pair never made it to getting married and ended their relationship in January 2004.

Jennifer Lopez later married singer Marc Anthony, with whom she has twins Max and Emme, 13, and Ben married Alias actress Jennifer Garner, with whom he shares daughters Seraphina, 12, Violet, 15, and son Samuel, 9.

Marc and Jennifer have maintained a close connection and a solid co-parenting partnership despite their 2014 divorce.

Ben and Jennifer Garner called it quits in 2016, and their divorce was completed in 2018.

Lopez’s most recent romantic relationship was with Alex Rodriguez, former professional baseball player, who proposed to her, after 2 years of dating her, in 2019. In early April, the former couple announced their engagement in a joint statement, with one section saying that they have learned that they are better as friends and that they look forward to being so.

Jennifer was reported to be communicating with Ben again shortly after their separation, which was verified by the pair’s late April visit to Ben’s Montana home. Since then, the pair has increased their PDA and seems to be preparing for the future.

Most recently, TMZ claimed that Affleck and Jennifer Lopez were arranging an ‘out-of-town vacation’ to celebrate Affleck’s 49th birthday on August 15.