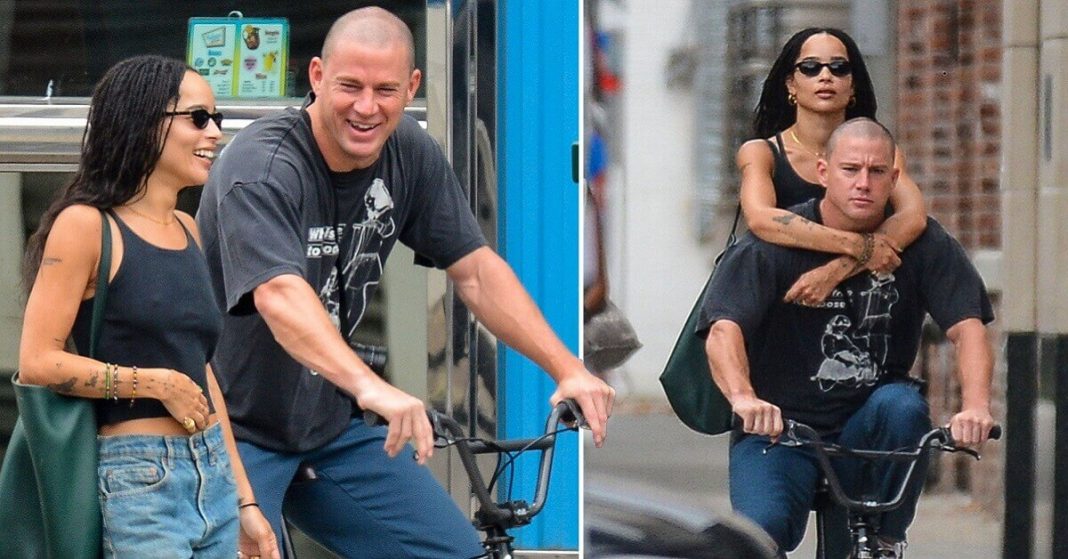 Channing Tatum & Zoë Kravitz have grown closer particularly in the past few weeks though they have denied the dating rumors; the pictures tell a completely different story.

Channing Tatum; 41 & Zoë Kravitz; 32 have been photographed together in different locations cozying up and appear to be engrossed in each other while enjoying each other’s company in complete solitude.

The two were spotted together on the East Village coast and later on enjoying a joint bike ride in New York City. The actress was spotted with her arms wrapped around the shoulder of the “21 jump street” actor while he rode on the bike’s peg.

Both were dressed casually donning jeans and black tops. Kravitz was also wearing sunglasses and was carrying a green tote bag.

According to the reports, “there’s more than a friendship going on with Channing and Zoë, they are spending a lot of time together and having fun. They are more than just close friends or co-stars. Their relationship has grown into more.”

The rumored couple met on the set of the upcoming movie “Pussy island” which will also be the directorial debut of Zoë Kravitz. The film is about a cocktail waitress hailing from Los Angeles namely Frida who is attracted to a tech mogul and philanthropist named Slater King played by Channing Tatum.

The speculation of possible dating between the duo started back in June when during an interview for the film the both were observed gushing over each other.

“Chan was my first choice, the one I thought of when I wrote this character. I just knew from ‘Magic Mike’ and his live shows, I got the sense he’s true feminist and I wanted to collaborate with someone interested in exploring this subject matter,”

stated Kravitz while stating that she wrote the character of Slater King keeping in mind Channing Tatum.

Tatum has recently parted ways with his wife of 12 years. The “step-up” star was all praises for Zoë Kravitz regarding the project stating she is just amazing when it comes to dedicated work and producing exemplary projects like “high fidelity.”